Stuck with a 3rd Gen

BillGrissom said:
If you ever need to remove the transmission, say to replace a flex-plate and rear crankshaft seal, I recommend rebuilding it, if say 150K miles since the last rebuild. That is because removing it is over half the work. Might be unneeded since this is my second time in-there and both times I found the clutch plates and steel plates barely worn (1 mil) and the rubber still fresh (over 150K miles). The bearings and bushings were all still good (silver surface, only a few spots of copper showing on some thrust washers). At least remove the clutch packs to inspect, which requires removing the valve body. Last pass was to fix a front leak, which I suspect was due to a crack in the torque converter at a pad (didn't change it last time), so if nothing else I suggest replacing the torque converter if tranny comes off. If you have AWD, I suggest unbolting the transfer case first as trying to align it on re-assembly is tough and risks damaging a shaft seal. I didn't, so speaking as an idiot.
Click to expand...

I'd love to rebuild my tranny, when I drop it, but I don't have the knowledge at this point. However, I do plan on picking up a 4th gen tranny--2001 to 2004--to do the practice. There are lots of videos at YouTube and some tutorial literatures online.

This brings up the question of which master overhaul kit to buy? There are a few aftermarket ones at RockAuto, for instance. Or should I go with the Mopar Master rebuild kit. If so, where to buy? Dealer? They love to rip you off, lol!

With my knowledge level at this point, when I drop the tranny, I can/will replace the torque converter, replace the front oil pump, remove the diff cover to inspect the diff pin or differential cross shaft to see if it has moved.

EDIT: found this Mopar master overhaul kit at Amazon. One review says that it does NOT include the bushing kit. Don't know what that means. Otherwise, everything else is included. 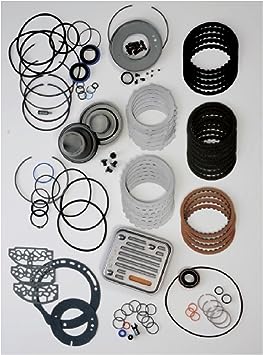